This isn’t actually anything to do with May 8th, but I’m off work following an operation, and the day has no previous blog entry.

My Dad moved house recently (long story, but I’m blaming it for the hernia that put me in front of this keyboard today). In amongst the dusty, massive pile of junk he deposited in the middle of my Mum’s garage floor was a toffee tin full of cigarette cards. And in that I found a small, yellowing notebook containing a series issued by the company W.D. & H.O. Wills called “Romance of the Heavens”, which I now know were issued in 1928.

Unfortunately the cover is missing, and my Dad hasn’t got a clue who was responsible for the book, which was obviously created with some care, and probably with the use of a razor blade by someone who these days would be deemed far too young to have access to one, but is now showing it’s age. All he knows is it wasn’t him, which I already guessed, because there are no steam engines in it. 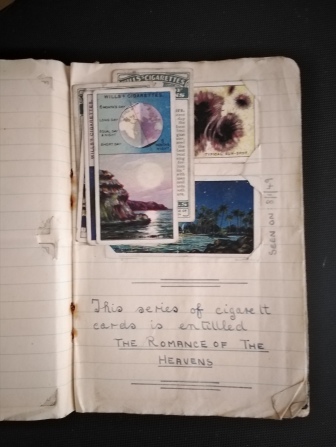 The author has also decided to add dates to the sides of certain cards showing when various phenomena were observed (they were all in January 1949, suggesting the creator of the book was not the smoker of the cigarettes from 1928).

The later pages of the book have some basic seasonal maps of the sky cut from a magazine or book and pasted in, and brief writings about each of the eight (including Pluto, excluding Earth) planets, in the slightly quirky order Mercury, Mars, Jupiter, Saturn, Venus, Uranus, Neptune, Pluto. I like to think that at some point in the winter of 1948-49, the phrase “Sh*t, I forgot Venus!” could be heard in the North Staffordshire countryside.

I’ll end with a short, badly drawn table to show how much has changed since as recently as 1949. For some reason our writer doesn’t mention any moons of Neptune, even though one was already known (the second, Nereid, would be discovered just four months after the latest known date written in the book). here’s a summary of then and now:

Not forgetting, of course, that Jupiter, Uranus and Neptune have also been shown to possess ring systems.